Kanuga president Stan Hubbard was presented the Dean’s Cross for Servant Leadership in Church and Society on December 6,
2015 at Virginia Theological Seminary (VTS) in Alexandria, Virginia.

Established in 2008, the Dean’s Cross is awarded to lay and ordained Episcopal leaders who embody their baptismal vows to “strive for justice and peace among all people and respect the dignity of every human being.” Selected annually by the seminary’s dean in consultation wit 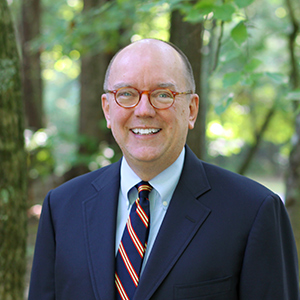 h the chair of the Board of Trustees, the honorees receive a handmade silver replica of the cross that topped the east gable of the 1881 chapel.

“Throughout his tenure, Mr. Hubbard has led initiatives to connect every aspect of Kanuga’s work to its central role as a safe place for relationship building and community formation,” said The Very Rev. Ian S. Markham, Ph.D., dean and president of VTS as he presented the award.

“Having worked closely with Stan since 2005, I have seen his leadership of our trustees, staff and volunteers under a wide variety of circumstances,” said Jack McMillan, chair of Kanuga’s board. “While he is an astute business professional, he leads from his heart in a way that makes this recognition particularly fitting.”

Hubbard was recognized alongside other distinguished servant leaders during the service of Advent Lessons and Carols at VTS. Other recipients of the award this year included the former First Lady, Barbara Bush, who was recognized for her tireless work to build family literacy programs in all 50 states and her lifelong lay ministries in The Episcopal Church.