Supporting ministry within the Latino/Hispanic Community

Due to Coronavirus (COVID-19) precautions the Nuevo Amanecer conference scheduled for May 12-15, 2020 is being postponed to a later date.

The Office of Latino/Hispanic Ministries and Kanuga partner in offering the biannual Nuevo Amanecer conference for those who are already involved in Latino Ministry as well as those that are interested in becoming involved. The conference brings together many successful and dynamic leaders involved in Latino Ministries; offers workshops that provide training that can be implemented in any parish; as well as keynote addresses that promise to inspire everyone. The conference is offered bilingually through simultaneous interpretation so that no one is left out and nothing is repeated.

The conference hashtag is #na2020 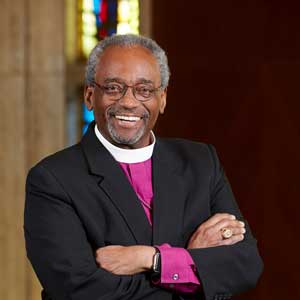 The Most Rev. Michael Curry, Presiding Bishop and Primate of The Episcopal Church

Throughout his ministry, Presiding Bishop Curry has been active in issues of social justice, reconciliation, speaking out on immigration policy and marriage equality.

In his three parish ministries in North Carolina, Ohio, and Maryland, Presiding Bishop Curry had extensive involvement in preaching missions; Crisis Control Ministry; the founding of ecumenical summer day camps for children; preaching missions; the Absalom Jones initiative; creation of networks of family day care providers; creation of educational centers; and the brokering of millions of dollars of investment in inner-city neighborhoods.

As Bishop in the Diocese of North Carolina, Presiding Bishop Curry instituted a network of canons, deacons, and youth ministry professionals dedicated to supporting the ministry that happens in local congregations.  He refocused the Diocese on The Episcopal Church’s Millennium Development Goals through a $400,000 campaign to buy malaria nets that saved over 100,000 lives.

Presiding Bishop Curry has served on the boards of a large number of organizations, including the Task Force for Reimagining The Episcopal Church (TREC) and as Chair and now Honorary Chair of Episcopal Relief & Development.  He was a member of the Commission on Ministry in each of the three dioceses where he has served. 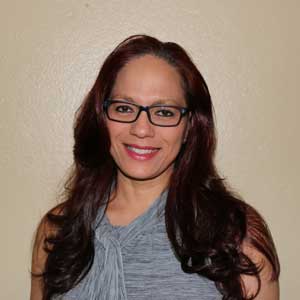 Damaris De Jesus Carrasquillo, Ph.D is a member of the San Juan Bautista Episcopal Cathedral, Diocese of Puerto Rico; collaborator of several local and national initiatives in The Episcopal Church. Professionally, works as a Clinical and Organizational Psychologist, harmonizing clinical practice with private consulting and teaching at the University of Puerto Rico in Carolina. Her topics of interest are: Leadership, Organizational Development, Planning, Quality of Life, Crisis Management, Health Psychology, Gender and Spirituality.  Collaborates as volunteer in community based organizations. Mother of Ricardo and Andrea; animal lover. Describes her life mission as “Serve, Love, Inspire, Transcend.” 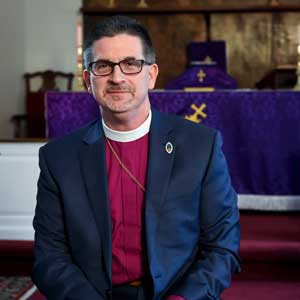 The Rt. Rev. José Antonio McLoughlin was consecrated as the seventh bishop of the Episcopal Diocese of Western North Carolina on October 1, 2016.

Prior to his election as bishop of the diocese of Western North Carolina, José served as the Canon to the Ordinary and Chief-of-Staff for the Episcopal Diocese of Oklahoma since 2008. Previously, José served congregations in the dioceses of Southeast Florida and Virginia.

Ordained in 2005, José earned his Masters in Divinity from Virginia Theological Seminary and Bachelor of Arts from the University of Central Florida. Prior to his call to the priesthood, José worked in the criminal justice field serving in the State of Florida as a police officer and in the U.S. Department of Justice in Washington, D.C. in various capacities, most recently as the special assistant/senior advisor to the assistant attorney general.

José and his wife Laurel have two children, Alexander and Alyson. Alex is a senior at Oklahoma State University majoring in Sports Media and minoring in Spanish. Alyson is in her first year at the University of North Carolina at Charlotte. Born in San Juan, Puerto Rico, Bishop José is bilingual, enjoys music, playing the drums, and studying 18th century American history. 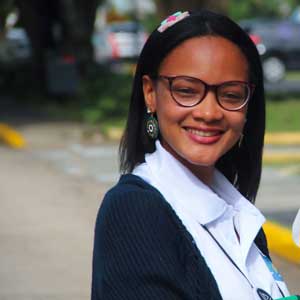 Ana Victoria Lantigua Zaya, was born on October 19, 1995, in the city of Puerto Plata, Dominican Republic. She is the third child of four siblings.

Ana has a BA in Social Communication, with a journalism major, from the Universidad Autónoma de Santo Domingo (UASD). She is also known for being a master of ceremonies, storyteller, Scout, announcer and actress in training at the National School of Dramatic Arts (ENAD).

In the Epsicopal Diocese of the Dominican Republic she has served as the National Youth Coordinator, member of the Vivencia Ministry team, and member of the Communications Committee for the Episcopax Magazine. She has given talks on communication strategies for social networks, volunteered at camps and summer Bible schools, and at the Center for Theological Studies (C.E.T.) Ana Victoria is also a member of the planning team for EJE 19, helped write stories for the summer Bible school booklets, and held various positions in different local congregations.

She currently works at San Marcos Episcopal School as an assistant at the initial level, cultural activities advisor and master of ceremonies. She is in charge of the Sunday Bible School and summer Bible School of the Parroquia Ayudada San Marcos. Together with other young people from the Diocese she is working on a digital radio station project. In collaboration with youth groups, she is doing theater presentations for children and the elderly. 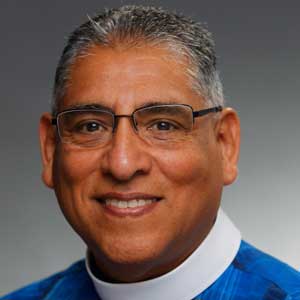 The Rev. Canon Anthony Guillén has been the Missioner for Latino/Hispanic Ministries as part of the Presiding Bishop’s staff since 2005 and Director of Ethnic Ministries since 2015. As Missioner, Guillén developed the Episcopal Church’s Strategic Vision for Reaching Latinos/Hispanics which was adopted at General Convention in 2009. This Strategic Vision challenged the church to rethink the dynamics of ministering to today’s Latino/Hispanic communities, two-thirds of whom are American-born Latinos characterized as multi-generational, English-dominant and bicultural.

Guillén as previously served the church at two parishes in the Diocese of Los Angeles. In his early years in ministry he served as a youth minister for 12 years before a 4-year period as a missionary in the Diocese of Western Mexico where he planted two missions, worked as diocesan youth coordinator and directed an earthquake relief program.

Guillén is committed to raising and equipping a large network of “digital disciples” that together can spread the Gospel and introduce people to the Episcopal Church. Guillén and the Office of Latino/Hispanic Ministries yearn for a church that embodies the multiethnic, multilingual and multicultural context we live in today. The vision is to make the Episcopal Church known to Latino/Hispanic communities that they may experience our church and embrace it as their spiritual home.

Rates are per person.