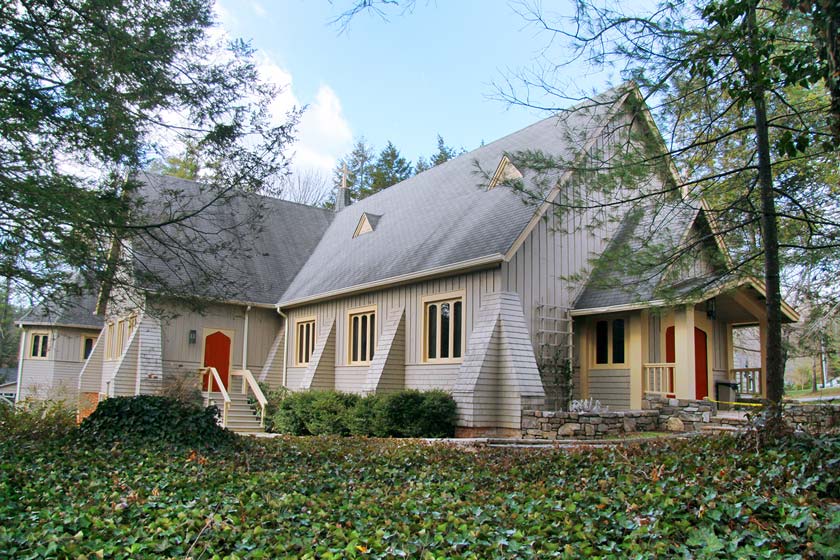 Leading the Way: A Generous Donation from the Averyt Family

This summer, the Chapel of the Transfiguration celebrated its 75th anniversary. Regarded as the spiritual home for Kanuga, the chapel has witnessed countless Eucharists, weddings, and baptisms.

Preserving the Chapel for the Future

Unfortunately, the passage of time has been less than kind to the chapel. After extensive examination, it was determined that considerable efforts were required to preserve the structure for future generations.

In an act that honored her family history and Kanuga roots, Kanuga founder Bishop Kirkman Finlay’s granddaughter, Peg Finlay Averyt, and her husband, Gayle, provided a generous donation to fund a thorough and professional investigation of the chapel’s restoration needs.

“I’m particularly thankful that their leadership demonstrates the deep and abiding legacy that Bishop Finlay left for each of us. Indeed, his dream is not merely a memory, but a living example of the mission to which we are called at Kanuga,” said Michael R. Sullivan, Kanuga President.

Funding the First Stages of Work

Thanks to the Averyts’ donation, Kanuga has engaged a preservationist architect out of Charleston who has done extensive work on numerous churches across the country and a local architect and structural engineer.

“We will be able to preserve the chapel as we know it while also enhancing its place for our mission,” says Michael. “I could not be more thrilled that the Averyts saw this critical need and stepped forward to lead us into a brighter future for the Chapel of the Transfiguration.”

For the Averyts, providing the first donation to jump-start the project was an easy decision. “The chapel at Kanuga is a special place to me. I attended services there with my grandmother in the 1940s, Gayle and I were married in the chapel in 1963, and my daughter Caroline was married there in 1992,” says Peg. “The chapel is the heart of Kanuga, and Gayle and I are pleased it’s being restored for future generations.”

While donations are not being requested for the chapel restoration at this time, a capital effort is anticipated to begin in the near future to support the full renovation of the treasured building.