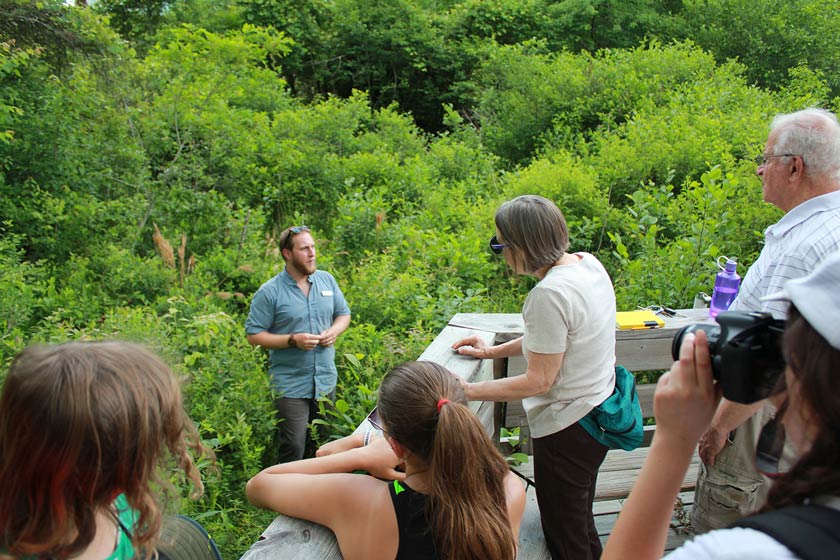 Tucked along Kanuga’s boardwalk is a natural treasure that quietly hosts an array of rare plants and unique species. While guests may bypass this wetland without a second look, it’s worth taking the time to slow down and admire nature’s masterpiece.

Recently named a wetland treasure by the Carolina Wetland Association, the bog is an example of a Southern Appalachian bog, the rarest type of wetland habit in the southeastern United States.

“One of the primary reasons we were named a wetland treasure is because of the type of bog we have here, and because it has been so well managed,” says Clint DeWitt, Environmental Projects Manager. “It is also home to a rare plant community.”

A Home for Unique Plants and Animals

The bog is host to a variety of flora and fauna including tag alder, poison sumac, cinnamon ferns, and sphagnum peat moss. The variety of plants and the presence of muscadine grapes and nearby fruiting trees mean a variety of wildlife lives there as well.

“We have lots of water-loving species in this concentrated area,” says Clint. “Our bog is home to a variety of snakes and turtles, gray tree frogs, toads, and salamanders.”

Birds seen at the bog include the great blue heron, eastern screech owl, golden winged warbler, and ruffled grouse. The bird population fluctuates during the year based upon migratory patterns. “We have so many interesting birds here that you can’t see in otherwise in Western North Carolina,” says Clint.

Carefully Maintained to Benefit All

While the bog may look wild and unkempt, it actually requires a lot of maintenance. “It requires a lot of upkeep,” says Clint. “It takes lots of work to keep woody vegetation and invasive species out. We also manage the bog to preserve endangered species and keep biodiversity up as well.”

Clint hopes the award and its ensuing recognition will encourage guests to stop by the bog during their visits. “’It’s a very unique place,” says Clint. “Take advantage of the educational aspect of being able to view a bog in person. We encourage everyone to picture a bog in their mind, and then go down and see what’s going on in our bog.”