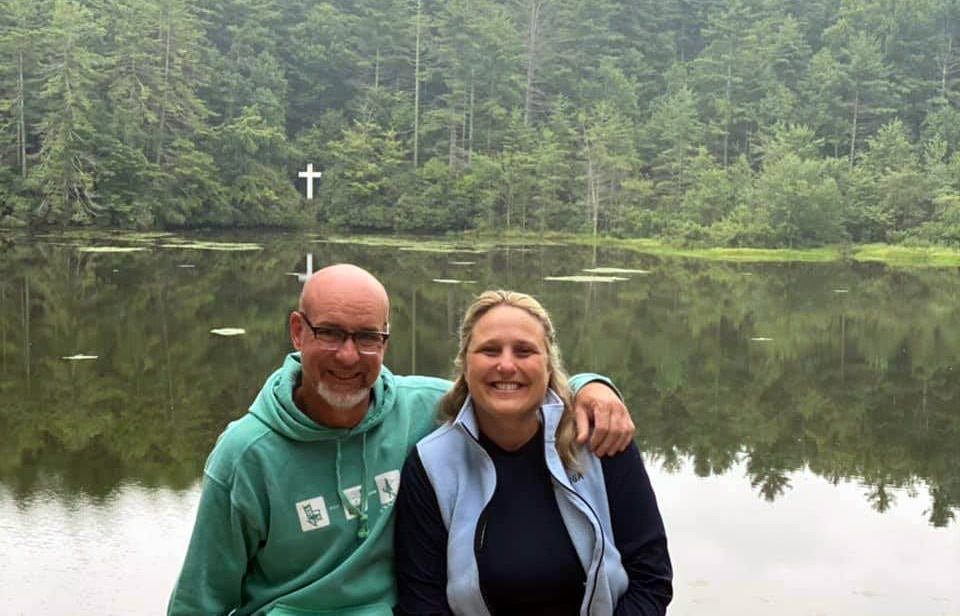 I Want to Marry You: A Kanuga Proposal

Alex Paradise could never have known as a little girl that one day she would be proposed to at her favorite place in the world. Alex and her family have been coming to summer guest period since she was five years old. “My step-father, Harold E. Barrett came to Kanuga with his family and ran the boys camp when he returned from World War II. We have always come to week five and for many years when I was younger attended week six as well,” she recalls.

Alex began dating Joe Bradley in 2017, and brought him to Kanuga for guest periods with her family in 2018 and 2019. “Sadly we all missed the summer of 2020 because of Covid. When we returned in 2021, Joe proposed to me in the Lakeside Chapel as we were walking back from Nibble & Sip,” says Alex.

Joe says he knew how much Kanuga meant to Alex, and conspired with her mother, Louisa to make it all happen: “The idea of proposing to her for our lifelong commitment in a place she had such lifelong memories made perfect sense.” Readying for guest week, Joe packed the engagement ring, 24 plastic champagne flutes, a two-song playlist, and Bluetooth speakers in his luggage. “Louisa was in on the plan and had given me her blessing to marry Alex several months prior.”

But it wasn’t until the evening of Nibble & Sip that Joe selected the Lakeside Chapel as the actual proposal site. “Alex and I walked down from the cottage and I saw what I thought was an outdoor amphitheater (Lakeside Chapel). I saw the cross shimmering on the water as the sun was setting and immediately decided this would be the location and this would be the night,” says Joe. “Alex’s Mom had decided to stay back in the guest house to rest, so during the gathering I told Alex I would go check on her. And I did, but I also “planted” my proposal supplies under the chapel benches, including speakers, champagne, glasses, and the ring” before rejoining Alex.”

On the walk back from Nibble & Sip, Joe took Alex to the chapel. The cross was glowing in the moonlight. “I carefully pulled my phone out and hit play on the two-song playlist. Alex was a little surprised to hear music coming from under the benches! First up was Dave Mathews’ backup singers serenading, ‘dance with me.’ We danced. Then I played Bruce Springsteen’s, “I Want to Marry You.” During the chorus, I dropped to one knee, opened the jewelry box, and slid the ring on her finger.” Alex said YES and they celebrated for a few moments with laughter and champagne before heading back up to their guest house, where family and friends were waiting to share in the moment.

Alex and Joe will be married this month in a small family ceremony at Grace Church in New York City, where Alex’ step-father served as rector. A blessing of their wedding will be held at Kanuga’s St. Francis Chapel during guest week five.