It’s 35 degrees outside, and barely a few degrees warmer inside the Kanuga Lake Inn on this frigid January day. Several people throw scraps of wood into the burning fire in the fireplace of the barren common room on the first floor and hope the room warms up soon. The old wall heaters have been removed throughout the Inn while an extensive $6.5 million renovation takes place. The renovation began in December of 2015 and is scheduled for completion in May of 2016. The project’s leadership team gathers each Thursday in the common room with blueprints on a table to discuss the progress made the week before and what lies ahead.

Varnadore says despite the wintry meetings, he enjoys his role with the historic project. 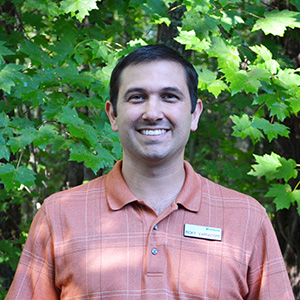 “My job is to make sure every detail reflects our guests’ needs and expectations throughout the project,” says Varnadore. “I can’t wait for those who love Kanuga to return in May and enjoy the updated Inn—they’ll be amazed. I’m also making sure that all decisions support efficient maintenance and housekeeping. We’re also developing a capital budget so we’ll have money to replace carpets, repaint and update as needed in coming years.”

Varnadore has been with Kanuga since 1999 when he joined the maintenance department and was eventually promoted into the leadership role. He grew up learning electrical work from his father, a full-time electrician and building inspector, and his love for construction and maintenance grew from there. Now, he manages a team of 37 in the grounds, maintenance and housekeeping departments. In addition to Varnadore’s weekly renovation progress meetings, he is in contact almost daily with the Triangle Construction Project Superintendent Gary Black, who works on site.

The renovation project marks a highlight in Varnadore’s career.

“I’m honored to be in this position at such an important time in Kanuga’s history,” he says. “The Inn was built in 1968 and made it possible for Kanuga to become a year-round conference and retreat center. Now, we’re taking it a step further by improving accessibility and making staying at the Inn a more welcoming experience for all.”

If you have questions about the renovation or wish to make your contribution to the capital campaign designated to fund the project, please contact Vice President of Advancement Gary Giniat at (828) 233-2816 or gary.giniat@kanuga.org. More information about giving to Kanuga.