A Conversation with Bruce Garner 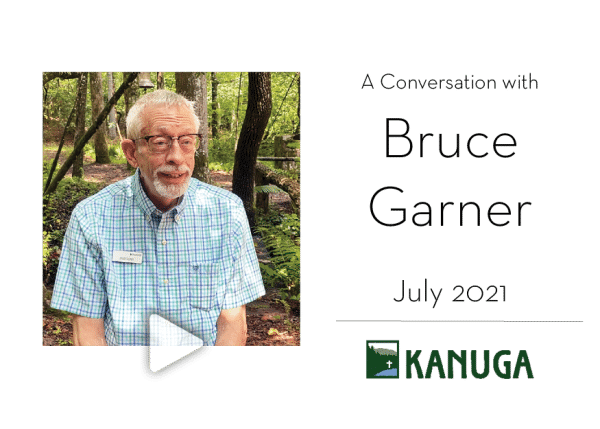 In the thirty years since his visit to Kanuga for the Provincial Synod pre-General Convention in 1991, Bruce Garner has come to love what he calls, “the atmosphere of the place, the thinness between God and us,” as he said in our interview with him this summer.

Bruce has come to Kanuga in many different capacities, including serving as chaplain assistant for Kanuga summer guest periods. Over the course of the last decade, he has performed myriad invaluable services inside Kanuga’s Chapel of The Transfiguration, restoring holy objects and bringing back the shine of the original wood and brass. “God deserves a good show, as I used to tell the acolytes. The liturgy is the highest form of worship that we can give. It needs to be done with joy and commitment. This carries on over into physical worship spaces for me. Where we worship and the condition of where we worship reflects in many ways our commitment to God,” he says.

Bruce, baptized and confirmed at Church of the Holy Comforter, Atlanta, is a lay leader in All Saints’ Church, Atlanta, where he was head verger for 23 years. He was also lay deputy for the Episcopal Diocese of Atlanta at General Convention and served on the Executive Council of The Episcopal Church. He was a trustee for General Theological Seminary in New York as well as the national president of Integrity, through which he advocated for the full inclusion of all the baptized in all the sacraments. Bruce brought the Province IV Network of AIDS Ministries conference to Kanuga beginning in 1996. His papers are housed at Emory University in the Stuart A. Rose Manuscript, Archives, and Rare Book Library. Bruce was presented with an honorary doctorate from Berkeley Divinity School, The Episcopal Seminary at Yale, in 2016.

At Kanuga among guests and staff alike, Bruce is known as a quietly powerful spiritual presence. He performs his duties with reverence and humility (and the occasional delightful chuckle). His gifts are many and he shares them generously. In addition to volunteer service, he supports Kanuga philanthropically “…because I want to do what I can to help ensure that Kanuga will thrive for generations to come.”

If you see Bruce during your visit to Kanuga, please join us in thanking him for his longtime support. Enjoy some of his Kanuga memories and stories in this video, recorded at St. Francis Chapel during summer 2021 guest period.