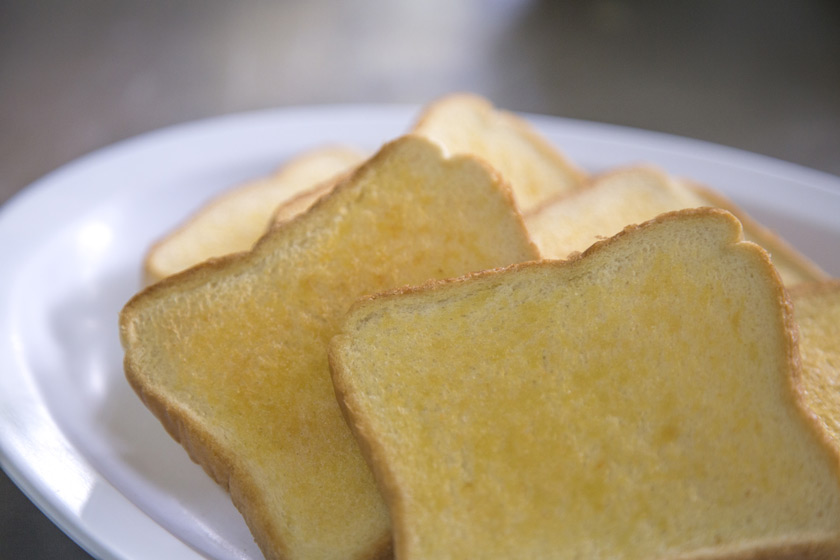 A Toast to Tradition

Sometimes it’s the humble things that become the most endearing. Like Kanuga toast. A humble slice of white flat-top bread—blessed with margarine and baptized under the heat—has become the calling card of the dining hall and the conference center itself.

“It’s one of those traditions that when I’m away from Kanuga and traveling for business, people who have any knowledge of Kanuga will bring it up,” says Jimmy Haden, Vice President for Community and Church Relations. “They will ask, ‘What is this toast we hear about?’” While the recipe is simple, it is hard to replicate beyond the dining hall. “We butter a sheet pan with margarine and lay the bread out. Then we butter the top with margarine and cook it in a 500-degree oven for about 15-30 minutes,” says Barry Phillips, Director of Food Service.

After spending time in the oven, the toast is transferred to a holding box where the real magic happens. The hot holding box gives the bread its signature crunch and texture. “If it shatters, then it’s ready,” says Barry.

Packing Up A Taste of Kanuga

While the toast may shatter upon contact—or first bite—its ability to endure is legendary. The desire to share a literal piece of Kanuga has resulted in the toast surviving many cross-country and international journeys!

It’s been shipped overseas to Afghanistan to active-duty military personnel and tucked inside Christmas packages destined for Germany. For those who can’t make it to summer guest period, the staff have been known to send little care packages of toast through the mail. Upon arrival, the toast is always intact and fully edible with the signature crunch.

While Kanuga toast has been a part of breakfast for as long as anyone can remember, the iconic carb did have a brief blush with extinction. In May 1989, Marriott Food Service took over production in the dining hall. The desire to implement some quick improvements resulted in a different type of toast being served at breakfast.

The idea of losing Kanuga toast was unfathomable to guests. “There was practically a riot among guests. The new staff didn’t realize they were messing with tradition. The next day there was Kanuga toast,” says Jimmy.

As for why a simple piece of toast holds such a special place in everyone’s heart, Barry believes he knows the answer. “The people who love it, really love Kanuga. It’s a memory,” he says. “It brings back the memories of you and your family sitting around a table eating and laughing.”